The company is wholly owned by Sumitomo Dainippon Pharma Co., Ltd. (DSP), a leading globalpharmaceutical company based in Japan.

With no approved product yet, Boston Biomedical needed an exhibit that would provide an environment for oncologists to learn more about new therapies, and that would eventually grow into a launch booth once its product is approved.

Since Boston Biomedical’s goal at ASCO was to promote its pipeline in a classic exhibit, flexibility, modularity, and reduced weight continue to be part of the Access solution. Creating a clearly defined space, a “room,” in which scientists can discuss their research with attendees, was important. From the debut of the exhibit, Access has continued to add custom elements to standard wall patterns, allowing Boston Biomedical to control costs yet maintain a very consistent look. The corporate green stands out on the show floor in a sea of blue and white. Boston Biomedical’s exhibit has become a destination for ASCO attendees.

The uppermost layer of the structure is a large fabric hanging sign, providing heightened identity on the floor and defining the perimeter of “the room.” Suspended from that uppermost layer is a second fabric structure featuring word clouds. Below these two pieces, three white canopies are suspended—and from them, three additional green fabric pieces on which pendant lights are mounted. Between these two sets of three suspended pieces, green LED lighting sheds more light on the space. Finally, a wood-grain vinyl floor completes the experience of stepping into a unique environment surrounded by so many other exhibits. 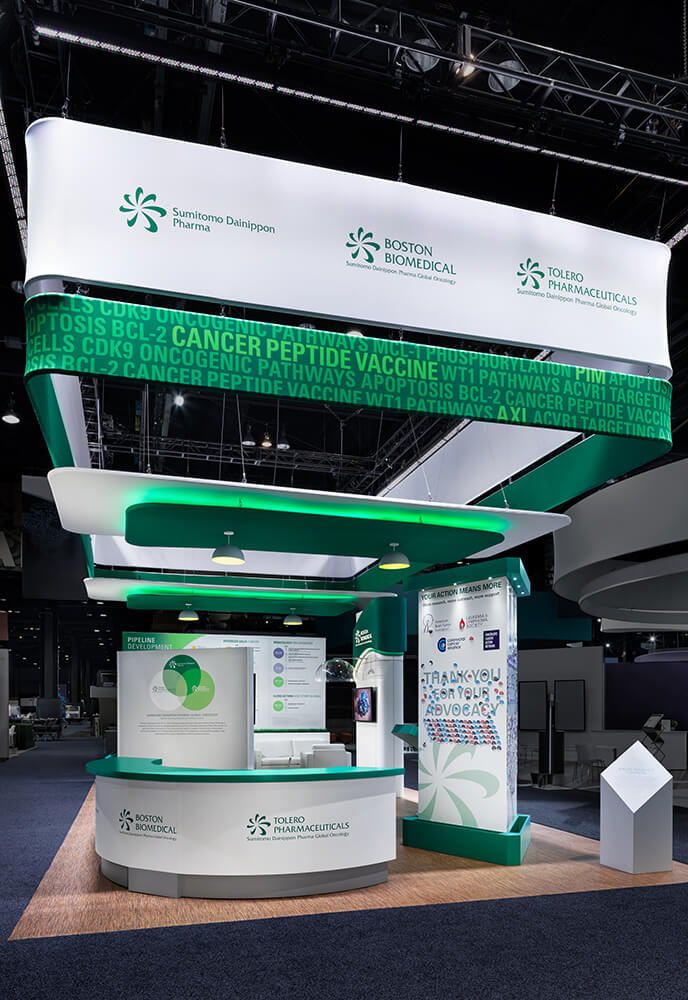 Oncologists have come to recognize the elaborate, multi-tiered overhead structures as distinctly Boston Biomedical. Even when the company exhibits in smaller spaces, there is a distinct look and feel, as the photo of the linear exhibit shows.

Through its strategic partnerships and investments from its parent company, Boston Biomedical continues to unveil new paths to innovative cancer treatments.